Welcome to ACC Football Online, a user friendly directory dedicated to helping our friends find Atlantic Coast Conference football games. We help you find the legal game streams to watch ACC football and basketball games live online. We are not affiliated with the ACC, just huge fans like you.

To visit the official website of the Atlantic Coast Conference go to TheACC.com. 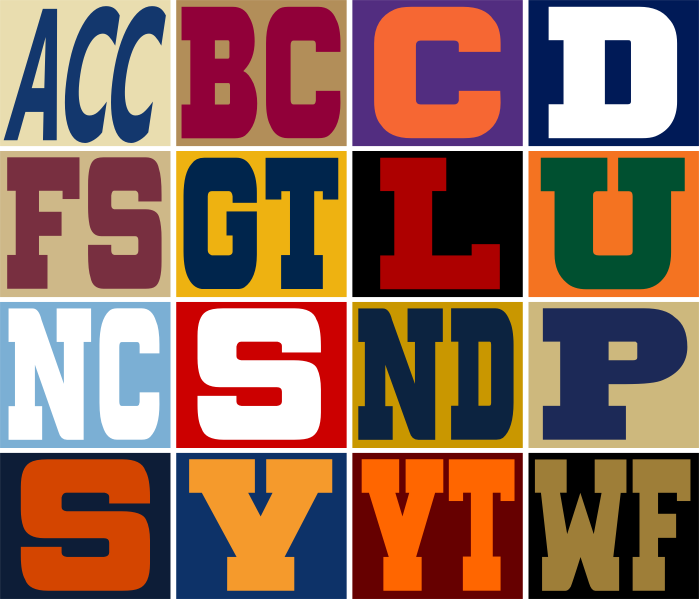 The Atlantic Coast Conference was established in 1953 by seven former members of the Southern Conference. Clemson, Duke, Maryland, North Carolina, North Carolina State, South Carolina and Wake Forest were the founding institutions of the ACC. The University of Virginia was admitted later that same year.

The ACC is the definitive Atlantic Coast Conference, its members span from New York to Florida. The conference now controls the most television households and highest population of any collegiate conference in the nation. With the number one basketball conference and unlimited potential in college football, the ACC is the nation’s preeminent collegiate athletic conference.

The ACC is currently made up of two seven school divisions, the ACC Atlantic Division and the ACC Coastal Division. In 2014, the ACC made changes to its football divisional structure because of the addition of new schools. Members of the Atlantic Conference and their respective division alignments:

The University of Notre Dame Fighting Irish are full members of the ACC, however the school competes as an Independent in football.

The two division champions play each other in the ACC Football Championship Game at the end of the regular season. The winner of the ACC Football Championship Game receives an automatic bid to play in the Orange Bowl. Besides the Orange Bowl, the ACC Bowl Game tie-ins include the Peach Bowl, Sun Bowl, Music City Bowl, Military Bowl, Independence Bowl and Fight Hunger Bowl.

ACC Football Online does not host any streams of the games online. We only display links to the official members and partners of the ACC and the legal ACC online streaming broadcasts. Each ACC school streams football and basketball games online. We are not affiliated with the Atlantic Coast Conference or any of its member schools. Visit the official website of the Atlantic Coast Conference.

©2022 ACC Football Online is an independent fansite and is not affiliated in any way with the Atlantic Coast Conference or any of the conference's member institutions or partners.